The Mighty Heroes was an animated television series created by Ralph Bakshi for the Terrytoons company. The original show debuted on CBS, on Oct. 29, 1966, and ran for 1 season for 21 episodes.

The series is set in Good Haven, a city that is continually beset by various supervillains. When trouble occurs, the city launches a massive fireworks display to summon a quintet of high-flying superheroes into action.

The team members are clumsy accident-prone bunglers who often find themselves in silly situations. A typical occurrence has them hopelessly tangled together offering each other stock apologies, often while falling en masse into an even worse situation. In combat, they are even worse, continually getting into each other's way until they are all captured by the villain (who almost always has enormous V-shaped teeth). However, after escaping the villain's deathtrap in the cliffhanger, the team always manages to regroup and fight with proper coordination to win the day. In an episode of Mighty Mouse: The New Adventures, also produced by Bakshi, the Mighty Heroes retired and became accountants with a firm called "Man, Man, Man, Man & Man."

The series came about when the Terrytoons staff were pitching series proposals to the animation company's parent corporation, the CBS television network, only to have them all rejected. When the CBS representatives asked if there were any other proposals, Bakshi, at the time a young animator who had been invited to the meeting, spoke up and improvised the proposed The Mighty Heroes on the spot.

Reruns of The Mighty Heroes were eventually syndicated by Viacom in the 1970s as part of the Mighty Mouse package. There have also been licensed VHS releases of some episodes and bootleg DVD releases of the entire series, but there has never been an authorized DVD release of the show. Episodes of The Mighty Heroes also appeared in movie theatres for a time, with an episode shown to audiences, preceding the main attraction.

They appeared as guest stars in the episode "Heroes and Zeroes" of the late 1980s series Mighty Mouse: The New Adventures, produced by Bakshi, in which they had all retired and were running the accounting firm of Man, Man, Man, Man and Man. Even Diaper Man had grown up, evidenced by his wearing a moustache.

They appeared in the 1999 pilot The Curbside.

Almost all of the 21 episodes were named after the enemies the Mighty Heroes encountered in each. 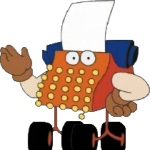