The Terrytoons Wiki
Register
Don't have an account?
Sign In
Advertisement
in: Episodes, Gandy Goose Episodes, 1941,
and 3 more

The One Man Navy

The One Man Navy is a 1941 Gandy Goose cartoon.

After being rejected by the U.S. Navy during World War II for being an incompetent, Gandy's Goose-like girlfriend suggests that he create his own navy. Encouraged by her suggestion, Gandy gets in the war anyway. With the aid of his barnyard friends, Gandy creates his own military. He feeds chickens some dynamite, and they lay explosive eggs. Taking his munitions, he heads to sea to do battle with a enemy submarine, and he helps the U.S. military win the war. 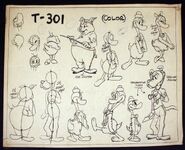